Interview of the president of the FES of Russia, Director of the Institute for New Industrial Development and ex-Chairman of the Committee for Economic Development of St. Petersburg Sergey Bodrunov, REGNUM News Agency.

A person can work during the day at a factory, and give culinary advice online in the evenings. One person can occupy three jobs today, or sometimes vice versa. We still talk about creating «jobs». Even the presidential decrees stated the need to create 25 million jobs. This means, given the load, that we need to find 37-40 million people somewhere who will work in those jobs. Where can we find them? Who put this task in the decrees? Illiterate people. It is necessary to create competences, not abstract jobs. A job is a place where accessories and skills are concentrated while a competence is the person’s ability to «adjust» himself to a certain type of activity. A person, for example, can have the competence of a cook, and not just work as a cook at a particular nano hot food unit, be it «high- performance» or «high-tech»

Sergey Dmitrievich, what do you think should be the main outlines of the economic model for St. Petersburg? What are the main tasks to be set?

Besides, we must not forget that we are living during the information revolution. And this, among other things, means that the world is moving on towards a knowledge-intensive economy. Your gadget, which you are using to record our conversation, has less hardware than before, and more knowledge. The main characteristic is “the acceleration of the acceleration» of scientific and technological progress. The level and the importance of knowledge are growing in all aspects of production–from jobs to materials.

Does this mean that education becomes even more important than before?

— Not only this. The character of work changes. Until quite recently, people could not actively combine different types of activities or jobs while today it is quite normal.

In this new economic situation, the importance of knowledge, mobility, plasticity of the workforce is growing. It is impossible to predict what jobs will be needed in 15 years, but it is possible to predict what competencies will be needed. And here we are faced with another problem: the quality of forecasting is not at the desired level. The economy is developing faster than we are able to comprehend the laws of its development and, even more so, to teach economics students accordingly.

On what points should the Saint Petersburg economic model focus in these new circumstances?

— We need a new approach. It is necessary to answer the question: which local pieces of the global marketplace can develop faster than others. First of all, it is digitalization. President Putin spoke about this at the recent economic forum. Honestly, I nearly fell off my chair when I heard him say it. We spoke and wrote about this for 10 years, but everyone rejected this idea, because everyone wanted to operate the usual way: «jobs, machines, equipment.» Now everyone will start turning the other way. It is high time.

You are talking about high tech, but at the same time many experts and officials believe that the future of the city’s economy is not just digitalization but also tourism.

— From a global perspective, tourism leads to a dead- end in terms of economic development. It is a dead-end for the same reason: digitalization. Let’s say, do you know what a palm tree looks like from above? Now you know it visually, and soon you will know and feel it palpably by means of virtual reality helmets and other similar gadgets. Already there is no need to take a selfie on the roof of a skyscraper, you will be able to see, and not only see–feel! — everything without a selfie. Digitalization will soon allow us to observe all the features of Saint Petersburg from any angle. And at the museum where I want to «go», my «digitized» guide will tell me all I want to know, not what he invented and not what someone dictated to him.

I will not only be able to see things, I will also be able to «talk» with those who were there before me. In the foreseeable 15-20 years we will be able, while at home, with the help of small devices, much smaller than a TV set, to see and feel much more than what we see now on tourist trips. Will it make sense for people to actually visit cities and towns? If not, who will need a powerful urban tourism infrastructure?

Now we receive lots of Chinese tourists who have not seen enough. But in about twenty years there will be almost no tourists anywhere. Just like there will be no drivers, guards, cash, and we will not have to close the doors. Because the importance of the material aspect and the associated social institutions will decline.

WHAT KIND OF CAPITAL WILL SAINT PETERSBURG BE?

Predictions based on the previous models of development of the city’s economy described Saint Petersburg’s role as either a financial or an auto- cluster capital. It did not work out. But what kind of capital should we ultimately become?

— A Russian digitalization capital is exactly the kind of capital we should become. We have everything for it right here. Digitalization consists of two important components. The first is hardware, the second is intellect, software. This basis rests on several sub-bases: on the one hand, the production of certain materials, the production technologies and culture, and all the necessary infrastructure; on the other hand, brilliant mathematicians and engineers.

Unlike many other cities Saint Petersburg has everything to solve this problem. We have the country’s — or even the world’s — most prominent software experts. They are able to solve problems quickly and efficiently, and these solutions are then bought by businessmen from, say, the US, a country which is considered advanced in terms of the relevant industries. Now we experience a constant «brain drain» because of the absence of a proper level of demand. Demand implies the availability of money, benefits, support, and serious challenges. If these conditions are met, then all our «brains» will remain here, moreover–others will arrive.

As for hardware, we also have important technological achievements. Suffice it to mention the Technological Institute, Zhores Alferov’s projects, the Institute of Information Technology, Mechanics and Optics. We have «applied specialists» who know how to use this hardware–in the field of aviation, transport, energy. We have good universities that can train specialists in the necessary fields of expertise. In Soviet times there were examples of such task-setting, let us recall Akademgorodok. If we set this task now, if we create a special economic zone here, then this line of activity will pull the rest of the city’s economy after it.

You can add another important area–medicine and pharmaceuticals. The city is already engaged in this area of research and is doing it right. People, human capital, is an important component. To a great extent this capital depends not only on education (as I have already said) but also on the people’s health. Technologies for making people healthier, extending human lifespan and improving the quality of life will play an important role in the nearest future.

The framework of the city’s future economy can rest on these two elephants: digitalization and pharmaceutics. We must, of course, continue to support those enterprises (for example, energy companies) which will retain their importance for the city and for other industries in the next 10-15 years.

Digitalization of the marketplace is very important. Knowledge is the main economic resource of the future. And all the knowledge that we possess turns into information when we begin to work with it. The information must have a form that will allow it to penetrate everywhere. Digitalization allows you to put this on a technological basis. We immediately begin to move forward, because a technology is emerging: how to build a new life in which the knowledge capacity will be implemented through digitalization. Next, we need to understand in what directions should digitalization proceed. We need to find out which of the city’s enterprises are capable of solving these problems. We cannot just remove a particular enterprise from the federal program but we can set new tasks for it upon agreement with its management. So we will encourage the taking of advanced positions in these areas. Sooner or later we will accomplish these tasks one way or another, but if we do not start today, we will be late, and the market will be occupied. This is the most reasonable approach to planning the future economic life of the city. 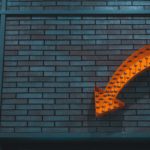 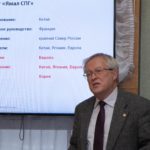 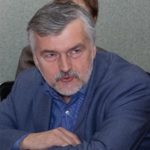 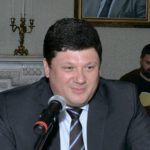 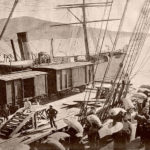